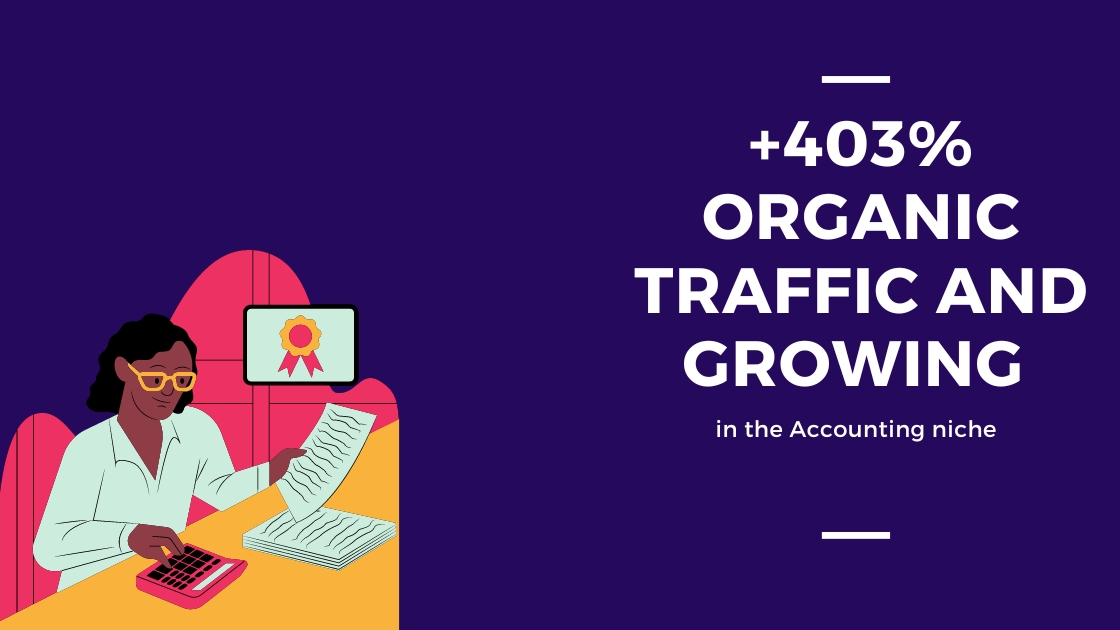 Even though they are in a super competitive niche, Accounting SAAS, we were able to grow their organic traffic by 403%. This is a fantastic result, especially considering the difficulty of the niche itself.

PS! Here’s another SAAS SEO case study where we increased the client’s organic traffic by 8000%.

The growth has only just started and we’re still working on the campaign, which is why we expect even more significant growth in the near future.

All of this was achieved by simply focusing on SEO basics – Building quality content and meaningful links.

The client offers a SAAS product in the accounting niche.

Their solution saves accounting companies a lot of time and has been growing mainly through word-of-mouth advertising in the country it was founded – Estonia.

There is no reason the product couldn’t be sold to international companies. But because the service itself is quite cheap, and the accounting niche is highly competitive and expensive, the cost of advertising just didn’t make financial sense.

Their product only cost $10/user which makes it hard to achieve a positive ROI from ad spending.

For this reason, the founder decided to strategically invest in SEO to hopefully achieve a much higher ROI on their marketing dollars.

Fortunately, this hypothesis has proven to be correct and they are now seeing an increasingly positive return on their investment.

As said above, in addition to the niche being expensive to advertise in with paid ads, it’s also highly competitive in regard to SEO.

Many competitors have put hundreds of thousands, if not millions, into content marketing and SEO so it’s a real-life David and Goliath situation.

Another challenge was that even though they were doing quite well in their native country on SERPS, they weren’t featured on the international search results. This was likely due to the product and website development having been done in Estonian, not English.

Our Plan of Attack

Based on what we saw, we devised the following plan:

The Results So Far

The traffic has only recently started to grow exponentially, so we expect to see a continuous growth curve. However, at the time of writing this, organic traffic has increased from 1,862 sessions in January to 9,390 in October.

That’s an increase of 7528 sessions per month.

Initially, most of the traffic came from Estonia, which is where the company was founded and has seen a lot of its early growth. The increase of 7.5K visitors per month came from International visitors, which is exactly what the client wanted to achieve.

Traffic value at the start of the campaign was under $1,000. This was mainly because the rankings were based in Estonia, where there’s less competition in paid advertising, which serves as the basis for Ahrefs traffic value calculation formula.

Through our work, roughly $15,000 of monthly traffic value has been generated thus far.

As mentioned previously, this will likely continue to grow and at the very least remain at this level for a few years if we were to stop our campaign right now.

This is what the current cumulative link values look like:

And even if the client halted SEO services right now, the traffic will likely grow for at least the next 6-9 months.

With a very conservative estimate, the traffic should remain steady for the next 6 months and thereafter start declining at 10% per month.

This is how the ROI graph would look like until the same time next year:

The fat overlap between value added and costs come from the nature of SEO. Once you build the traffic up, it will continue to grow and exist for years into the future without you having to do anything.

Whereas with paid ads, as soon as you stop paying, your traffic will stop immediately.

Future Plans for the Campaign

We will continue using our current link-building and content-creation strategies because they are proving to be fruitful for both parties.

However, as mentioned above, we will start to attack one high-value keyword after another, aggressively. Only once we’ve achieved a ranking within the top 5, will we proceed to the next target page.

If we don’t do this and spread our link-building efforts too thin, we simply won’t be able to compete with the Goliaths of the industry.

We will also continue to build links to pages with the highest commercial intent because we want the client to rank for the most profitable keywords within the niche.

This is likely to yield a massive ROI for the client.

NB! This is an ongoing case study and we will update the results as the campaign progresses.

PS! If you want us to take a look at your site to assess if we’re able to add significant value to you through our services, get in touch.

PPS! As a bonus for reading through the entire case study, we’ll offer a free video audit analysis of your website and what we could do for you.